The planned 3.6% rise in fares next January has got a strong reaction from local Liberal Democrats.

"Here in Welwyn Hatfield, we will be paying more for less. This line has always featured as one of the most expensive in Britain, a country which has among the highest fares in the world. Currently the operator Govia Thameslink Railway (GTR) is being rated the worst in Britain, and from next year, our service is going to get slower, will be less frequent from some stations (Brookmans Park and Welham Green, less convenient (ending of trains to Peterborough) and in many cases the trains will have fewer seats than now.

"Meanwhile the motorway is almost at a standstill every day, just a mile from a rail line that could and should be carrying many of the commuters if the service was better and cheaper.

"Frankly, we should be getting a reduction, not an increase, at least until a proper service is restored.

I am launching a petition against these raises and poorer service, at stop the rail fare rise." 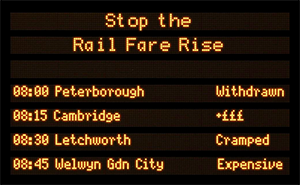 We, as citizens of Welwyn Hatfield, are opposed to yet another fare rise in 2018, against a background of poor service and a worse future timetable.

We call on HM government to exempt users of Great Northern from the rise because of the low levels of punctuality and customer satisfaction compared with other lines.

We call on GTR to reverse its planned cuts to local services, reinstate trains to Peterborough, and increase train frequency.