76th anniversary of the Battle of Britain 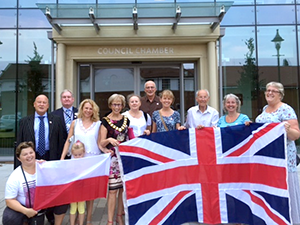 On the 15th September we were celebrating the 76th anniversary of the Battle of Britain, which united British and Polish pilots in the common struggle against the ominous Nazi threat. The fierce aerial battle between the RAF and the German Luftwaffe was crucial to the Allied triumph over the Third Reich. During those events Polish pilots established an unparalleled reputation for courage, commitment and extraordinary effectiveness in combat.

On the 15th of September, the organisation Hurricane of Hearts (HoH) has ensured that at Polish stores, service establishments and institutions across London - we will be able to find stickers with a white and red chequered pattern. This sign is a timeless symbol of Polish pilots who fought in the ranks of the RAF to defend the borders of their ally, Britain.

Recently, there has been considerable debate about immigration in the UK, its importance and impact on quality of life in Britain. The stickers are also a way to remind the public that without the Poles' dedication, fortitude and ability, Britain, as we know it today may not exist.

Poles live, work, and pay taxes in this country and they want their adopted nation to develop and flourish with their help. 76 years ago, the Poles came here and fought shoulder by shoulder with the Brits in the defence of Britain, and for the freedom of wider Europe from tyranny and barbarism.

Michal Siewniak, former Lib Dem cllr in Welwyn Hatfield said: "Let's continue building bridges, let's continue showing that diversity matters. Let's use this memorable event as an opportunity to highlight the unique friendship between out two nations. After recent and tragic incidents in Harlow and Leeds, let's continue demonstrating that there is no space for hate and that we all need to do our bit to create a better, more cohesive society where we are all treated the same"