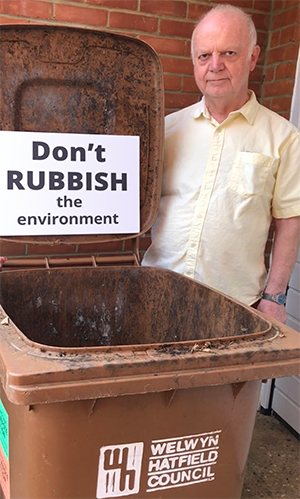 With reporting now complete on the first year since Welwyn Hatfield Borough Council rolled out a £35 charge for garden waste collection, the borough's overall recycling rate has plunged from 53% in 2016/17 to 43.4% for 2017/18. This sharp decline puts Welwyn Hatfield near the bottom of all Hertfordshire local Councils. At the top of the Herts league table is Liberal Democrat-controlled Three Rivers District Council, which achieved a recycling rate of 62.4%.

"These results are alarming and disappointing, though not unexpected," said Barbara Gibson, County Councillor for Haldens Division and Opposition Spokesperson for Community Safety and Waste Management. "At the time of the proposed change, hundreds of people voiced concerns about the environmental impact, but the Conservatives voted unanimously to ignore those concerns, and rushed through the change without proper consultation and planning.

"As a result, this Council sent 15% more residual waste to landfill in the past year, an increase of nearly 3000 tonnes overall, and an average of 58 kg per household. This is simply unacceptable."

Liberal Democrats are calling for the Council to use proceeds of the brown bin charges to implement a free food waste collection for all residents as soon as is feasible.

Cllr Malcolm Cowan, Leader of the Lib Dem Group on the Council, said "The brown bin charge was always badly managed, and people were initially angry about the cost. But now they are most concerned about the environmental impact. The Conservatives have taken us backwards. That's just rubbish!"