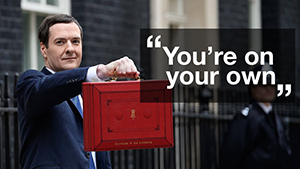 Hertfordshire Liberal Democrats are seriously worried about the fallout from the Conservative Government's budget 'for working people' that is clearly anything but.

Despite saying 'Britain deserves a pay rise', George Osborne has apparently decided this only applies if you work in the private sector, so if you're a teacher, fire-fighter, police officer or nurse you deserve to have your pay cut every year in real terms.

The real concern is how the Unions will react. Len McCluskey of Unite has already stated public sector workers 'will be furious that they face a further four years of pay pain', so there seems little doubt that the trajectory the Tory Government have set is a collision course with the Unions. We can look forward to schools, leisure centres, council offices and even fire stations closed due to strikes, with all the problems for residents and extra costs that entails.

The budget also hit our young people hard, excluding them from housing benefit, the living wage proposals and removing student maintenance grants for the least well off students. This will have an impact as we see more homeless and destitute youngsters who our social care system will be required to support. Already creaking under the pressure, this will be a further significant strain.

Social housing changes are also a significant concern, the budget further undermines the supply of social housing, already under serious pressure, leaving the most vulnerable residents out in the cold. This will further add to social care costs, with further pressure on already stretched services.

Lib Dem County Cllr Paul Zukowskyj, Shadow Spokesman on Resources, commented "The budget is a real 'Sherriff of Nottingham' budget, taking money from aspiring families and handing it to the very wealthiest, through reducing corporation tax whilst cutting wages for teachers, police officers, nurses and fire-fighters.

"The impact on our county, especially if we see significant co-ordinated strike action from all the services that may be affected, could be enormous. The sad thing is this is so unnecessary, the economy is improving, but the Tories want to limit the benefits to their super-wealthy mates and most people will get a kick in the teeth and not much more. The Nasty Party is free at last and determined to show it can be every bit as nasty as in the past."