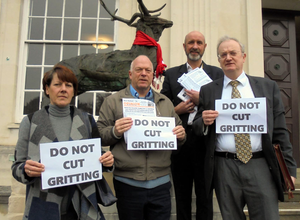 Plans by Conservative controlled Hertfordshire County Council to cut 608 roads, including 57 that served primary or infant schools from its winter gritting routes in event of snow or very cold nights being forecast, have been postponed till next year.

These cuts had been voted through, against Liberal Democrat opposition. Lib Dem Cllr Tim Williams (second from right) delivered a petition from 662 residents signatures against these cuts and forced a new debate on the subject at the County Council's December Highways Panel

Less than 24 hours before the start of the meeting Council Officers were forced to admit that the plans they had agreed in September could not be brought in due to difficulties with the gritting contractors and would need to be re-considered next year.

Cllr Stephen Giles Medhurst (Lib Dem), leader of the opposition said "This is at least a stay of execution on ill-considered gritting cuts. The Council wants to try again to remove those 608 roads again next year. We must not let this happen without a root and branch review of what is being done. We must protect local communities and schools to enable them to stay open."