Council says walk more, drive less — unless you plan to shop at Aldi

How exactly does a Council for a Garden City, that claims to want us all to drive less, allow a major new supermarket to open that has no pedestrian access? How does the County Council's Highways department, which bears the responsibility for reviewing access and travel plans and raising any problems, also fail to notice?

The new Aldi store in Welwyn Garden City opened recently to great fanfare, but residents arriving on foot immediately realised there is no safe way into the site for pedestrians. Customers on foot, wheelchair or mobility scooter are forced to brave the two lanes of traffic entering and exiting the car park.

Lib Dem Councillors responded quickly to concerns raised by residents, speaking with Aldi management and querying both Councils to determine how such a serious oversight could occur. Cllr Malcolm Cowan is leading the push for enforcement action be taken by Welwyn Hatfield Borough Council to remedy the situation immediately. 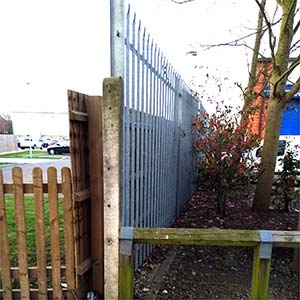 The entrance to the footway shown on Aldi's planning application 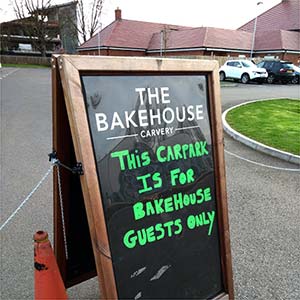 The planning application, approved in September 2016, includes a drawing that shows a footway that does not exist - Aldi have failed to provide it, indeed have fenced off where it should be. Other documents submitted, however, do not mention the footway, and the officer's report fails to address pedestrian access at all. The Herts Highways' initial response seemed to rely on access via the vehicular access or the pub.

The pub does, indeed, have a separate gated pedestrian entrance, but it does not give access to the Aldi car park, and is currently roped off to prevent use.

This is a case of triple failure:

Hopefully it will be remedied before any mishaps occur. But both Councils need to examine their policies and practises to ensure that future planning applications put pedestrians higher on the priority list.