County Council to start probe into floods - of last June 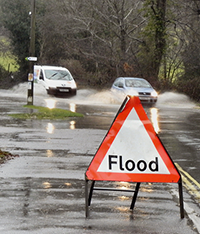 "Hold the front page. Just 10 months after the floods of 23 June last year, Herts County Council is to start to investigate what happened and what should be done. It would be laughable if it was not so serious for the many people whose homes and property were damaged" said LibDem county councillor Malcolm Cowan.

"Everyone expects insurance companies to swing into action after events like this, and move to give their customers the compensation they are due. The county council has a duty as Lead Flood Authority for the county to investigate flooding and see what can be done in future to prevent repeat incidents. To expect residents to remember exactly what happened nearly a year on is unrealistic. In the case of one of my neighbours, he has moved house, so that is one witness down already".

"I had rashly assumed this work would have been finished by now, not that it hadn't even started", he added.