The scene of an accident just before Xmas outside John Lewis has been abandoned with no further work planned, even before any restoration work is done.

LibDem councillor Malcolm Cowan reported the damage on 23 December. Loose parts that came off the vehicle that crashed were removed, but that is all. Now Malcolm has received a report saying nothing remains to be done - no repair of the broken cycle racks, no repair to the smashed paving, no removal of the temporary protective fencing. It is both potentially dangerous, as well as an eyesore.

The report from HCC highways says:

We have inspected this location and the necessary works have been carried out. No further action is planned. Thank you for bringing this to our attention.

Malcolm says "You would think this is astonishing, however very little that comes out of highways surprises me. Doubtless they will say this is a mistake and apologise, but it happens so often. The people of Herts, who pay their wages, deserve so much better. How on earth can they say work is complete when it hasn't even started, 7 weeks after I reported it? Appalling." 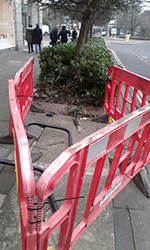 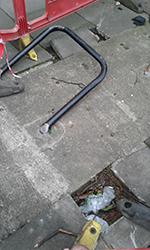