Does this look fixed?

Malcolm Cowan, LibDem councillor is furious with a response from the county council's highways service. He reported an upturned drain in Heather Rd WGC. The response he got was: 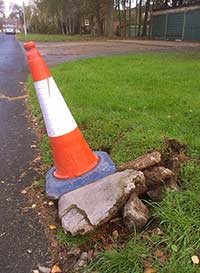 Malcolm says "As you can see from the 'after' photo, there are lumps of concrete lying around, and the drain has not been re-laid. This is dangerous. The fact the cone has been left there shows work has not been undertaken.

"This is at least the third time in the last couple of years this has happened with faults I have reported – no work done, but claim it is fixed. Probably payment will be made on the basis of the incorrect report.

"When will they learn? I go back and check; what a shame no-one from the contractor Ringway, or from the county council does, otherwise there would not be a problem. Shamefully, I understand the county council are about to extend Ringway’s contract without going out to tender. What a farce."