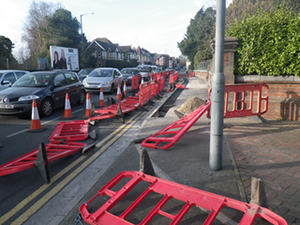 Cllr Giles-Medhurst said "Fines or deductions of a million pounds for failing to carry out work is a lot of hard cash. This includes strict penalties for not dealing with emergency repairs in time. Frankly I am disappointed and staggered at the amounts involved here. Whist there have been some improvements in performance in the last year, Ringway was still fined over £275,000 in 2015/16."

Now the Conservatives running the Council have changed the rules to allow Ringway to take even longer to carry out basic repairs. This shows the complacency of the Conservatives. Earlier this year the Conservatives voted down Liberal Democrat motions calling for changes in the way highways works were undertaken and rejected an all- party review of the way work is carried out.

Cllr Giles-Medhurst added "Fining Ringway is all well and good but surely the work should be done correctly and on time. Financial penalties do not take into account the inconvenience and upset caused to residents and it's time we overhauled the whole system to get a better deal for Hertfordshire residents and better value for money."