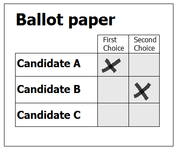 The result of the Hertfordshire was as follows

The Conservative David Lloyd went on to win after second choice votes were counted.

Chris White, the Liberal Democrat Candidate said "I stood in these elections to make a change to police priorities by getting them to focus on making women feel safer in public and at home, and open up the role of the Police Commissioner by making it more democratic. I will continue to lobby for these changes but regret I can't make them myself."