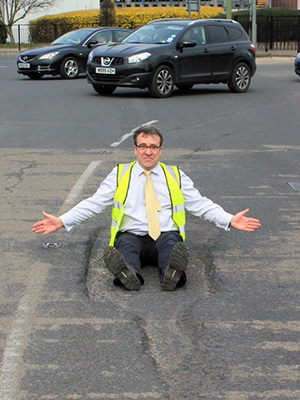 Cllr Pile's recent claim that there are 'only just over 900 unresolved potholes in Hertfordshire' might be true from his figures, but unfortunately the system he oversees is deeply flawed.

The over six foot long pothole seen in the attached picture has been outside the Galleria in Hatfield for over two months. It has been reported no less than three times. Twice, the report has been returned 'Repaired/resolved', yet within an hour of the second of these, Paul Zukowskyj, Lib Dem candidate for Hatfield South Division, drove through it, unrepaired, yet again.

Paul commented: "We're awaiting Herts Highways third response with bated breath. Will it be third time lucky? I've a further 200 potholes recorded in Cllr Pile's very own division, but what's the point of logging them if they simply say they've fixed them but don't bother to actually repair them? It's no wonder people give up, their 'wonderful new system' is appallingly difficult to use and when you do report a pothole, they simply ignore you. The Conservatives at County Hall need to take off their rose tinted glasses and get off their magic flying carpets and live in the real, pothole-filled world the rest of us bump through on a daily basis."