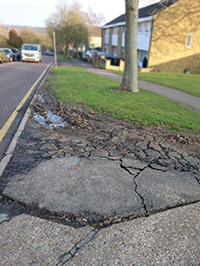 Local councillors have seized on figures from Herts County Council, showing spending on road and pavement maintenance and improvements have reduced every year over the past four years.

Spending on highways has plummeted from £39.2 million in 2013-14 to £30.1 million this year. This is despite inflation meaning that less can be done for the same amount of money, and the ever-deteriorating state of local roads and pavements.

Cllr Malcolm Cowan, Deputy Leader of the Liberal Democrat Group at County Hall said, "The Conservatives are continually telling residents that spending on roads is going up. These figures, provided by independent and council officers, show that in fact this vital spending has fallen every year for four years".

"The council are forecasting an increase next year. However they did exactly the same this time last year and instead we have seen another fall".

"No wonder local residents are complaining more and more about potholed roads and trip hazards on pavements".