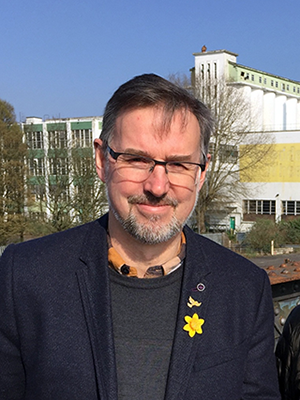 As previously announced last September, Welwyn Hatfield Liberal Democrats have local campaigner Nigel Quinton as the Liberal Democrat candidate for a snap general election. Now that Mrs May has announced her intention to hold an election on 8th June, and it looks as if Labour's turkeys will vote for Christmas, Nigel has this to say:

"First we have to call out the supreme cynicism of Mrs May calling this election now, driven entirely by considerations of party advantage. No commentator thinks that any of her stated reasons stand serious examination, and the hypocrisy of the woman who claimed to support Remain last year and is now wanting to fight as the Brexit champion is outrageous.

"However, as the fastest growing political party in the country, the Liberal Democrats welcome the challenge of campaigning against this government of unnecessary austerity who do not care for the disadvantaged or even the 'just about managing', but care only about securing political power at all costs.

"We need a government that works with the EU to secure the best possible solution, that reflects the desire of many in this country for a different relationship, but maintains membership of the Single Market, maintains membership of Euratom, the Erasmus educational links, Europol, and other European institutions that the government has no mandate to rip us apart from."

Nigel has a strong record of fighting for local people having served as a local Borough Councillor and he has campaigned on a number of local issues, including taking on a leading role in the Hospital SOS campaign as well as being involved in the fight against the Hatfield Incinerator.

The Liberal Democrats are in buoyant mood following a run of consistent by-election successes across the country. Membership has doubled since 2015 and now stands just below 90,000.

Read more about the Liberal Democrat vision for Britain...