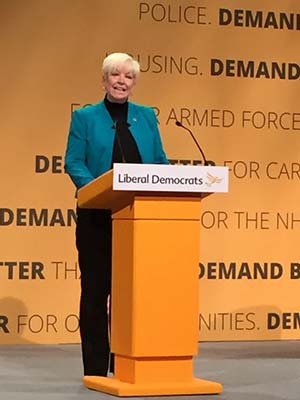 Liberal Democrat County Councillor and Parliamentary Candidate for Welwyn Hatfield Barbara Gibson spoke in a debate at the Lib Dem party conference, where the party passed an emergency motion calling on the Government to take urgent action to tackle knife crime by providing funding and support for youth services and protecting children from gang related crime.

In the debate, Gibson said: “A society that fails to protect, nurture and develop its children — all its children — will fail. We are currently seeing the early signs of that failure.

“In Welwyn Hatfield, Liberal Democrats have decided that investment in our youth has to be our primary focus, for two reasons: Because it is our responsibility, and because it is our opportunity.”

“This problem is too big to be political, and too important to wait for extended debate.

“We need to create the environment for the young to thrive. Thankfully, we don’t have to start from scratch. Across the country there are thousands of clubs and groups and volunteers already working to deliver those environments. But they can’t do it alone. They need facilities, and training, and professional support, and funding. They need champions at every level of government, demanding better for our children.”

Speaking after the motion passed, Gibson said Lib Dems in Welwyn Hatfield are working on a cross-party initiative to bring together local residents, both councils, charities, professional youth workers, sports organisations, clubs and others to work towards holistic solutions.

“There’s no question that after huge cuts in police numbers in the last decade, we need more police, but police alone cannot solve this crisis. The cuts to youth services have been a major cause of not only the rise in knife crime, but also other growing problems faced by young people.

“We must urgently reinvest in these services, and the Government must provide funding and make youth services universal.”