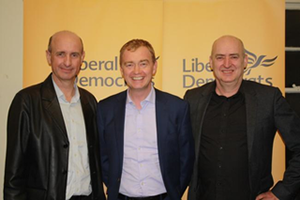 The by-election was triggered following the sad passing of former Lib Dem leader Ann Shaw OBE who had been a well respected community champion and councillor for more than three decades. When she stepped down in 2016, she was the longest serving council leader in the country.

Our party increased their vote share by 4.6%, with the Conservative party running a paltry second place with 26.6% of the vote. The other parties failed to gain ground.

Councillor Phil Williams (pictured right), a 54 year old father of three sons is a well known community figure. Phil has lived locally most of his life and in the ward for 21 years. He works in the family business - a cafe in Chorleywood called Rootz, and is invloved in a number of community and charity projects. He also runs a local weekly quiz night.

A breakdown of the result is as follows: