Local LibDems are celebrating despite not winning in the Haldens by election, as they finished just 70 votes short of the successful Conservative candidate, and just 17 behind Labour, despite finishing a distant 4th in May. 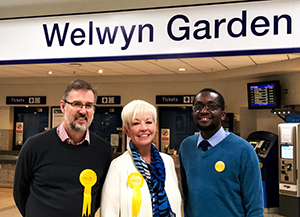 Nigel Quinton, recently selected to be their candidate if there were to be a snap General Election, had this to say:

"Our candidate Anthony Dennis did really well to finish so close at his very first attempt to be elected. Anthony only got involved in politics this year and wants to improve the area he lives in. He is just the sort of person we need in politics, who really understands what is important for local people such as himself."

The LibDem vote rose to almost 30%, and follows a string of recent by election successes across the country. The Liberal Democrats are in buoyant mood following a significant by-election win in Hemel Hempstead a few weeks ago, the 18th gain in a long run of excellent results since the May local elections. In May the LibDems made more gains than any other party, and in Welwyn Hatfield made three gains, their strongest showing ever.

Says local chair Cllr Paul Zukowskyj: "In Welwyn Hatfield our membership has more than doubled in less than two years. We now have many more people coming out to help us, who want to see a brighter alternative to the confusion of Labour and the complacency of the Conservatives. I see a bright future for the Lib Dems in Welwyn Hatfield."

It was clear on the doorstep that local residents are unimpressed with either of the established parties, with the Conservatives' broken promises on housing proposals and the Brown Bin Tax being significant issues, as well as their lack of vision on the Local Plan.

Anthony Dennis had this to say: "I will continue to campaign for a better deal for Haldens, and will be watching closely to see if the new Conservative Councillor lives up to his campaign promises, where his predecessors have let us down. We hope he has the courage to speak out against the Tory-run Council and his leader John Dean, when Haldens residents need his support."