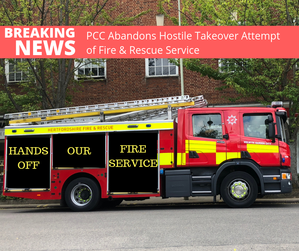 In a joint announcement issued today with Herts County Council, Hertfordshire Police and Crime Commissioner David Lloyd agreed to abandon his proposal to take control of the Hertfordshire Fire and Rescue Service, leaving the service under the governance of the County Council.

Responding to the news, Liberal Democrat Councillor and Opposition Spokesperson for Fire Service, Barbara Gibson said "This is long overdue, but very good news. How much time and money has been wasted by the PCC trying to railroad through his empire-building plan in spite of unanimous opposition from every county councillor, including those in the PCC's own party. In addition, most district councils have passed Motions opposing the move.

"The takeover bid should never have been submitted. Our sustained campaigning on this issue has saved the Fire Service from being asset-stripped and weakened. Lib Dems will continue to fight to put community safety first."