Time for Hertfordshire to benefit from London-style bus operating 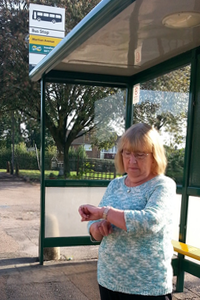 "Currently in Hertfordshire the county council has almost no power over bus services apart from the ability to subsidise certain routes. Much of the county is a bus desert. In other parts, it can be like the Wild West. Those of us outside London have always looked enviously at the way London is allowed to run bus services," Sandy said. "The Bus Services Bill currently going through Parliament now offers the potential for a London approach in Hertfordshire."

"Councils will be able to apply for franchising powers allowing London-style joined up ticketing across all bus operators with a single fares structure. There could be common branding and marketing to create a Hertfordshire bus identity. We could stop the ludicrous situation of bus companies competing on the same route instead of addressing the gaps in the network. And we could begin to tackle the biggest challenge in Hertfordshire, the lack of east-west public transport connectivity.

"There is one fly in the ointment. The current Bill only allows these full powers for councils with directly elected mayors. This is a piece of Cameron-Osborne ideology which discriminates against shire counties like Hertfordshire. I am grateful to the Conservative and Labour groups for supporting my motion and to Derrick Ashley, the Conservative cabinet member for transport, who has written to the new government to challenge this aspect of the Bill and ask that county councils are not discriminated against.

"With our over-crowded trains and heavily congested roads, a coherent bus service must be part of the solution," Sandy said. "Hertfordshire must be allowed to exercise these new powers."