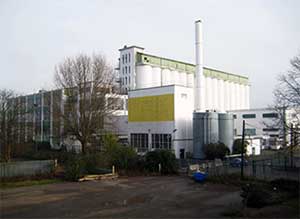 The new owners of the Shredded Wheat site in WGC unveiled plans to borough councillors last Monday. The plans increase the number of homes planned from 850 to 1471; this allows for 30% of all the homes to be social housing, working in partnership with a Housing Association, a key demand of the LibDems when the previous Spenhill plans were approved earlier in the year.

"This is a phenomenal number of homes, and we are concerned about the density and building heights proposed, but the very welcome increase in social housing proposed should allow for at least one Green Belt site to be removed from the Local Plan" said LibDem councillor Malcolm Cowan.

"I was pleased to hear them say they have more ambitious plans to enhance the rusting rail footbridge. They also said they thought Spenhill had 'hoodwinked' the council over this, with around 6 times the amount of money needed than Spenhill and the council had agreed."

County councillor for the area, Nigel Quinton, said "Malcolm and I have already had a tour of the site with the developers, and they have done more in a week to safeguard the site than Spenhill did in all their time here. We will continue to critically review their plans bur are hopeful there will at last be a happy ending for WGC.

"I am especially pleased that this will allow a significant number of affordable homes to be built – one of the chief failings of the Local Plan currently under Inspection is that the Council only expects to build 160 'affordable' homes per year, whereas its own needs assessment says we need to build over 800 a year for the next five years to make up the current shortfall. Of course, we have to make sure these are affordable in practice, and a significant number must be for social rent. Hopefully Mrs May’s announcement earlier this week of more money for Council houses might actually be delivered!"