"Shocked" at Weatherspoon's plans for pub on Parkway

Local LibDem councillor Malcolm Cowan has hit out at the plan for another pub on Parkway. The site, at 22 Parkway, backs onto Asquith House, an older people's block, and several other homes. It also plans to get rid of the car parking spaces in the back garden and replace them by a massive 2 storey extension and convert what is left into a beer garden.

"Abolition of the car parking spaces will push parking, and late night driving away, which is usually noisy, onto residential roads. I also have to question whether another pub is needed at all when there are two others within 50 yards."

Despite 'discussions' between the Borough Council and Hertfordshire County Council, HCC have stated their objections to Hat1 and Hat2, between them intended for almost 2,500 homes in the green belt, will still stand.

As Minerals Planning Authority, HCC can seriously undermine the Local Plan and an objection, sustained up to the Examination by a Planning Inspector, is likely to result in removal of the sites, if not scrapping of the plan altogether.

Paul commented "HCC's response shows that WHBC's local plan is holed below the waterline. Their plan to build +5000 homes in the green belt simply isn't deliverable when 2450 are supposed to be built on land that might not be available due to mineral extraction until 2048. I'm looking forward to raising this issue with the planning inspector where I'll be using HCC's objecion, amongst other issues, to demonstrate WHBC's plan is unsound and should be thrown out."

WGC is facing a double blow from the Tory run Herts County Council - not only loss of its fire station, but having a new Household Waste Site (also known as the dump) imposed, off Chequers, between Burrowfields and Eddington Crescent.

The same property report to WelHat council, in response to the local plan, which showed the fire stations plan, also show the HWRC threat.

Malcolm Cowan, LibDem county and borough councillor said "This looks like a double blow to WGC, and again, something that has come out of the blue. I assumed this plan had died a death a few years ago, due to the traffic issues and impact on nearby residents. Either traffic would enter and leave along Burrowfields which is dominated by existing heavy goods vehicle movements, or traffic would come in and out past the new homes near Eddington Crescent. Either way, homes off Chequers would be in the front line.You only have to look at the litter and mess near the Cole Green site to see what would happen here.

"When this idea was being floated a few years back, I asked WelHat council to let prospective purchasers in the Eddington Crescent area know about this in their property searches, but the council refused. I wonder what they will say now."

The response to WelHat council's Local Plan from HCC Property has revealed that Herts Fire and Rescue have ideas to close both WGC and Hatfield fire stations and replace them by one combined station on the A1000.

"This was the first I or I suspect anyone else knew about this - a couple of paragraphs in a response to the district council's consultation" said LibDem county and district councillor Malcolm Cowan.

"I am asking serious questions about why this is being done and what effect it will have on the service, and ability to respond. To move the WGC station from a central position in the town and close to the industrial area seems perverse. I know local people are not likely to take this lying down; the fire service is highly valued and this will take them away from people and property."

Local Liberal Democrats are calling for Welwyn Hatfield council to be trimmed, as part of the redrawing of ward boundaries, currently being carried by the Boundaries Commission - a government body.

Malcolm Cowan, leader of the group, told this week's council meeting that they would be campaigning to slim the number of councillors by having 2 per ward instead of the current 3. This would reduce the number of councillors from 48 to around 34. "It is hard to see why 48 councillors, with all the allowances and expenses, are needed, when just 7 councillors represent the whole of the borough on the county council , which has a far higher per head budget, and where 'councillors are expected to act as unpaid highways inspectors'" as Malcolm said to the meeting.

Liberal Democrat County Councillors have been shocked by local Tories' plans to hike council tax by 1.99% this year, the maximum they can without taking it to a county-wide referendum.

In a highly controversial budget Hertfordshire Conservatives have proposed swingeing cuts to buses and library services. Leader of the Opposition and the Liberal Democrat Group, Stephen Giles-Medhurst commented: "I am appalled. The County Council clearly has to be careful and look after taxpayers' money properly, but right now putting up Council Tax by almost 2 percent and also hitting services to the elderly and vulnerable leave a bad taste in the mouth. We all know times are tough, but the Liberal Democrat Group have looked long and hard at the options available to us and will be proposing an alternative budget that ring-fences essential services and freezes Council Tax"

"Of course many of these might have been granted permission, but that permission would have been accompanied by checking there was adequate parking, amenity space for families, and some contribution towards school places and infrastructure" said LibDem councillor Malcolm Cowan.

County councillors Malcolm Cowan (Handside and Peartree) and Lynn Chesterman (WGC South) have welcomed news that Woodhall library will not now lose all its paid staff. They had campaigned together to retain some permanent library staff in the face of a libraries consultation that proposed relying entirely on volunteers. "It is not yet clear how much time they would spend there, but is a good step forward, particularly when other local Tier 3 libraries such as Welwyn and Brookmans Park will not share this improvement."

Local Liberal Democrat parliamentary hopeful Hugh Annand has called on the government to do more to ensure that wealthy individuals and corporations pay their fair share of tax.

"At a time when public services are being cut, people are being asked to make sacrifices and the Conservative Party is announcing ever more draconian measures against sick and disabled people, the latest revelations once again show that there are rich, powerful people who think they are above the law," he told the Welwyn and Hatfield Times. 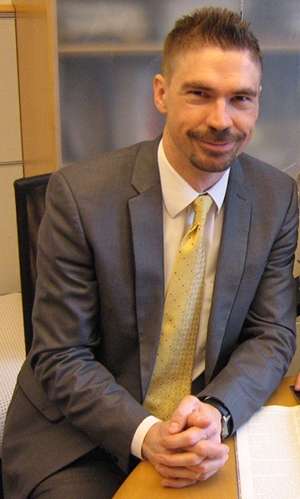 Hugh was born in Welwyn Garden City. His parents, Carolyn and Michael, were and still are long-established residents of the town. Following his primary education at St John's, Lemsford and Applecroft School, he went on to Haileybury, Hertford. Having discovered a talent for languages at an early age, he then spent a year in France and Germany before studying Modern European Studies at Loughborough University. After graduating in 1996, he spent a year in Yakustk, Eastern Siberia, teaching English at the university and working for the International Fellowship of Evangelical Students. He then returned to Welwyn Garden City and spent several months temping at Serono Laboratories, Roche and Schering Plough, before being offered a job with a scientific instrument company in Hemel Hempstead. Since then, he has had put his languages - he now speaks six - to good use professionally, in a career spanning the private, voluntary and public sectors.