Health chiefs of the East and North Herts NHS Trust and the E and N Herts Clinic Commissioning Group (representing GPs) have blasted the plans put forward by the ruling Conservative group on the county council to slash support for evening and Sunday buses.

In a strongly worded letter to the county council, they point out:

New rail operator starts with no trains, and no notice

Hundreds of intending rail users on Sunday turned up to find the new rail operator Great Northern were running no trains â€¦â€¦ and there had been little notice.

Local councillor Malcolm Cowan was one of those affected. He says "Firstly I was shocked there were no trains, but secondly at the attitude of the rail staff. One of them aggressively told me there had been notices up for 12 weeks and it was on the website. He also said it was in Metro, but how many weekend rail users read that? - a prominent advert in the Welwyn and Hatfield Times would have been far more use."

LibDem county councillor Malcolm Cowan has added his voice to the criticism of Veolia for trying to get a judicial review of the decision not to allow the incinerator at New Barnfield.

"There were very solid planning reasons why the incinerator was turned down, and this was supported by minister Eric Pickles. Do Veolia really think this can be overturned?" he asked.

Many readers will have been annoyed at the planned deep cuts to evening and Sunday bus services planned by the Tory-run Herts County Council, which will significantly affect WGC. What is even more disturbing however, is that most of the 'facts' on which these cuts were based, have turned out to be false.

Local LibDems have criticised the plans of Tory-run Herts County Council to drastically cut back on hours of opening of household waste sites ('tips'). "We knew they would be proposing bad news when they announced that the plans would be revealed after the elections" says Handside and Peartree county councillor Malcolm Cowan. "And we worried even more when they said the new contractor would put forward the plans, having already signed the contract, before anyone knew what was being proposed

"And we were right to be worried - 2 sites to close, and the rest to have hours of opening cut by 43%, shutting by 4pm, and with 2 whole days per week closed. We already have major problems at Cole Green with congestion, and cars queuing out onto the high-speed A414. This plan is likely to increase the frequency of queues extending onto the road and thus the chance of a major collision."

Following the successful campaign to block the planning permission for the New Barnfield Incinerator, the following motion has been proposed for debate at the Hertfordshire County Council's (HCC) full council meeting:

This council notes the Planning inspector's and Secretary of State for Communities and Local Government's decisions to refuse planning permission for the "Recycling and Energy Recovery Facility" at New Barnfield.

The summer festival (28th and 29th June) at St Mary's Church, North Mymms, open to all as a community fun day, was recently under threat because of health and safety concerns over the access road to the church.

The road, a 'patchwork quilt' of repairs, potholes and ruts, was concerning organisers as a serious trip hazard for people attending the festival, especially the elderly, who would have to use the road to walk between the church and other festival events.

St Mary's Churchwardens approached Hertfordshire County Council's Highways officers to see if they could get the road fixed, only to be told that the road wasn't 'adopted' and therefore wasn't the Council's responsibility. The Church would have to find the funds themselves to repair the road if they wanted it to be made safe. 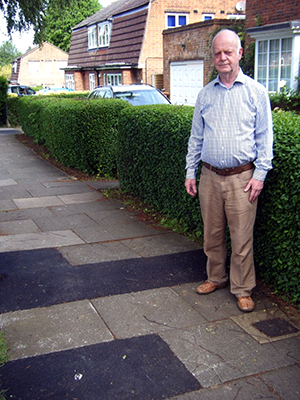 Local residents were up in arms when they saw highways contractor Ringway fixing footpath faults in Youngs Rise WGC by using tarmac, instead of putting paving slabs in. When the residents complained to LibDem county and borough councillor Malcolm Cowan, he was at first told by Ringway 'they didn't have enough slabs on the lorry'.

A resident then reported to Malcolm that one of the Ringway staff had said they aimed to replace all the slabs in the road by tarmac. Malcolm complained again, and was told, as can be seen in the extract from an email below, they didn't know they were working in a Conservation Area.

Clegg: The fight is on 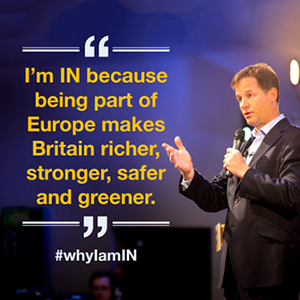 "The election on the 22 May is about one thing: do you think Britain is better off in the EU, or do you think we should be out? Finally the big question at the heart of the European debate is being addressed. At long last someone is taking on the Eurosceptic establishment - and it's us.