Nigel Quinton to fight next election for buoyant Lib Dems 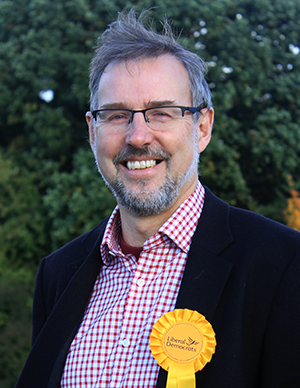 As the party conference season draws to a close with both Labour and Conservatives talking about an early General Election, Welwyn Hatfield Liberal Democrats have selected local campaigner Nigel Quinton as the Liberal Democrat candidate in any snap election.

Nigel has a strong record of fighting for local people having served as a local Councillor in Handside Ward, and campaigned on a number of local issues, including a leading role in the Hospital SOS campaign, and the fight against the Hatfield Incinerator.

"I am really proud to have been selected as it would be a huge honour to represent this wonderful area.

"Nationally the country is in crisis. Both the Conservatives and Labour are focused entirely on in-fighting while the economy worsens, threatening jobs and public services, and the environment is threatened like never before.

"Our 'do nothing' Tories have let us down dreadfully in Welwyn Hatfield and at County Hall. We need politicians who listen to the public, not pander to the tabloids, and provide the vision and leadership to build better communities. The draft local plan threatens to destroy the character of our area without delivering any of the affordable homes we desperately need.

"I will be campaigning for more school places, integration of health and social care, and better bus and train services to serve our growing communities."

Local Liberal Democrats are in buoyant mood following a significant by-election win in Hemel Hempstead last week, the 18th gain in a long run of excellent results since the May local elections, when the Liberal Democrats made more gains than any other party. In Welwyn Hatfield they made three gains, their strongest showing ever.

"Since the referendum we have signed more than 20,000 new members nationally, and we have doubled our local membership since 2015. The Conservatives have destroyed their reputation for economic competence, with investment plummeting, putting jobs at risk. Labour has given up even trying to speak to the British people, and is engaged in a vicious fight with itself.

"Only the Liberal Democrats are an open, optimistic and united party committed to spreading opportunity for the next generation and focus on re-building the British economy to protect jobs and services."