Not-so-Great Northern unaware of their lack of service 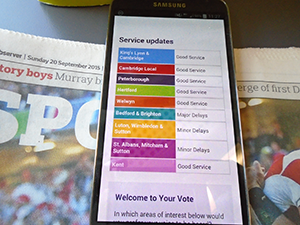 Local LibDem councillor Malcolm Cowan has again had to point out the rail operator not knowing that they had withdrawn all services on Sunday.

"Before we went to the station, my wife checked for engineering works - none were shown. We were therefore astonished when we got to WGC station to find there were no trains. And Great Northern's website said it was a 'good service' as the attached screenshot shows. Yet enquire on next train time and it says there are none! Which is it?"

"We then drove to St Albans to find 50% of trains there had been cancelled due to staff shortage, on a weekend when thousands of extra passengers were trying to get to and from the Rugby World Cup.

"This is far from the first time that Great Northern have described a complete lack of trains as a 'good service' - I had to complain to the WHT when they kept doing it last year - will they ever learn? And we had been to London the previous day, and there were no announcements or notices about no trains - no wonder there were so many dis-satisfied would-be travellers at the Howard Centre."