Twelve years ago as a Borough Councillor I was able to persuade our Council to start the process of a Climate Change Strategy and, after years of pressure from LibDem colleagues, to see positive moves towards increased recycling rates. Sadly, under our Conservative administration, the Climate Change Strategy withered on the vine, but I was pleased to see recycling rates increasing year on year to achieve 53% in 2016/17. This despite the ridicule I received from certain Conservative Councillors that 50% recycling would be totally unachievable. 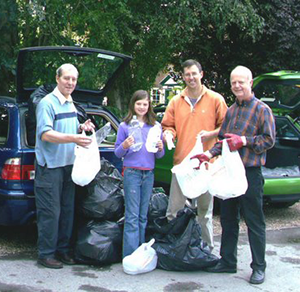 In 2005 local LibDems ran regular collections. Residents could bring their plastic waste, which at the time the council refused to collect.

By comparison, LibDem-run Three Rivers Council (in Rickmansworth) is achieving 63%, so there was still room for improvement, but now we hear that Welwyn Hatfield has dropped from 53% to 43.4% recycling rate in a single year. This fall in performance is due almost entirely to the Brown Bin Tax introduced last year, as many of us argued would happen at the time, which has massively reduced the amount of garden waste being recycled.

It is not even clear that the change of policy, which was pushed through by the Conservatives despite massive public opposition, has saved much Council Tax payers' money.

It is surely time for the new Conservative leadership at the Council to rethink this policy and start leading our community towards a greener future.