Rural footpath streetlights switched back on after Paul intervenes 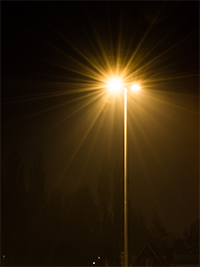 County Councillor Paul Zukowskyj has managed to get some streetlights on a rural footpath switched back on all night after receiving requests from local residents in Welham Green.

The footpath, which links northern Welham Green with South Hatfield, is heavily used by shiftworkers getting to and from work at Tesco's warehouse and other business locations in the area.

Shiftworkers using the route to get back and forth to work were having problems because the route was so dark. There were also partial obstructions that were difficult to see and navigate in the dark.

The route, which is actually part of National Cycle Route 12, is also heavily used by cyclists.

Paul commented "residents approached me because they'd asked if the hours when the lights were off could be modified or if the odd post could be reset to all night lighting, but had been given HCC's stock response of 'no'.

"When I asked initially, they also told me 'no', but after digging out the actual agreed policy, I found a loophole that suggested there may be hope.

I've now been informed that due to the loophole and that the request had come from me as the local County Councillor, the lights will be returned to All Night Illuminated as soon as feasible."