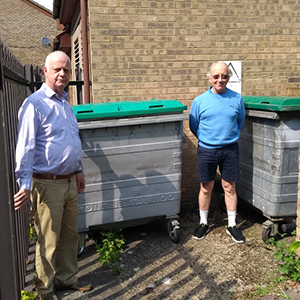 Serco's failure to provide a proper bin emptying service is shown up by the appalling record at flats in Duncan Close WGC - 34 failures in less than 30 months.

"That's 12 flats not getting a proper service" says local LibDem councillor Malcolm Cowan, who has often been asked to intervene. "To add insult to injury, the flat dwellers had to pay to get recycling bins supplied, unlike people who live in houses. Quite why the council makes it so hard by discriminating against flat-dwellers is beyond me" he adds.

"Then, when I ask the council why the bins keep getting missed, they say it is the first time - they have no record of previous failures. I am totally disgusted. They can't improve if they don't know that they have failed in the past."

Resident John Fogarty (pictured with Malcolm) who organised for the flats to get recycling bins, and regularly chases the council says "I think we are due a refund - we paid to get the bins and we pay for them to be emptied but the council does not carry out its side of the bargain. No-one learns, no-one supervises. It is a disgrace".