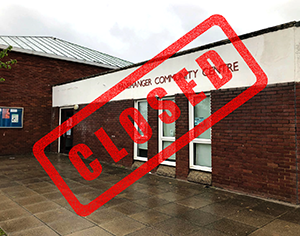 Panshanger Community Hall Trust Limited, the charity that has operated the centre on the Council's behalf since 1994, challenged the Council's proposed increase of the rent from £200 to £20,000 per year, which was based on the Council's decision to charge rents for community facilities based on 'market value'. The case has dragged on for years, draining away the charity's financial reserves to pay for legal fees, and preventing the Trust from making improvements to the hall pending the outcome.

Following a judge's decision on 10th April that set the market value at £15,000 per year, the charity dissolved and informed community groups that have used the hall that all bookings were cancelled.

The abrupt closure has left many in the lurch, including Panshanger Church, who lease the rest of the building and utilised the hall for a number of essential community activities, including a weekly Parents & Toddlers group that serves 100 families, coffee mornings, food bank collection, debt advice, wellbeing programmes, youth club activities during school holidays, and more. Other groups utilising the hall had provided support groups, dance and karate classes, badminton, and Weight Watchers. The hall was also booked by a number of area residents for things like children's birthday parties, and the short notice of cancellation has left them without a venue.

Liberal Democrat spokesperson Barbara Gibson said "This is the direct result of a bad Council decision that ignores the value to our community of charities, churches and other community resources that are providing essential services that the Council doesn't provide. They seem to see this community centre, as well as others across the borough, as potential cash cows, rather than the community assets they are supposed to be. These buildings are owned by the tax payers and should be serving their local communities. The Council should be investing in and supporting these groups, not hiking up their rent to commercial levels.

"Their action in this case has already destroyed one charity, and now threatens others. The money wasted on legal fees could have been poured into improving the facilities and expanding community services. Instead, a volunteer-run charity that was enabling many groups to provide services for Haldens and Panshanger residents has been crushed out of existence. These are the same Councillors who have for years chosen to subsidise the coffee shop at the cinema, to the tune of more than £200,000 a year."

Reverend Hayley Young of Panshanger Church said the Church would be happy to work with the Council to take over the management of the Community Centre and expand its community offerings, but could not afford to do so at the new rate with the building needing so much work. The minister worries that if the Council leases the Centre to a commercial group in order to achieve market rent, the Church will be unable to afford to continue using the space, and may be forced to move. In the meantime, the Church is scrambling to continue providing services without access to the hall, and trying to accommodate some of the other bookings in the church's side of the building.

Councillor Malcolm Cowan, leader of the Liberal Democrats group on the Council, pledged to raise the issue again at the next opportunity. "If this week's election goes as many are predicting, and the Conservatives lose their control of the Council, we will be able to reverse this policy and return our community centres to our communities."