Yesterday Siobhán Elam was elected as the new Liberal Democrat Councillor in Handside Ward with 52.4% of the vote, taking over from Rachel Basch who had had to resign having been promoted into a politically restricted role in the Civil Service. 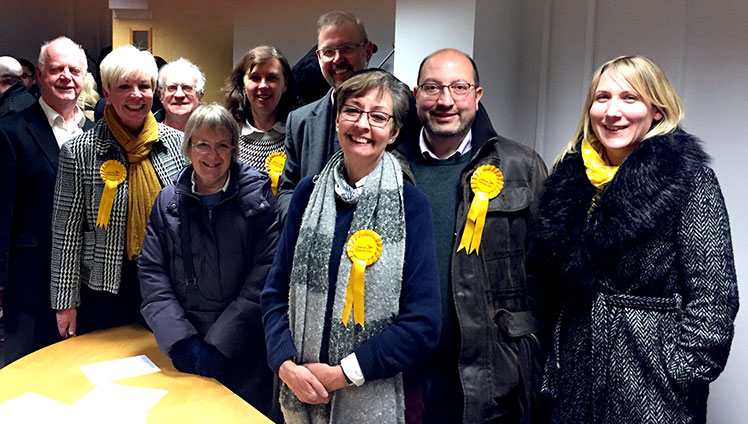 Siobhán, who only joined the party this year and has not been involved in politics before, said: "I'm delighted to have been elected tonight to serve the people of Handside. I am looking forward to doing everything within my power to make sure that I do justice to the confidence that people have placed in me. It is such an honour to represent my neighbours in this way and I want to thank everyone who has made this possible."

The Conservatives, who in 2016 won two out of the three seats in Handside, and a significantly higher overall vote share, had complained that the election should not have been called and the seat left vacant until May. Commenting on this, Liberal Democrat Group leader Malcolm Cowan had this to say: "This was an election the Conservatives increasingly showed they didn't want to happen and we can now see why - despite the massive resources they brought in, Handside has spoken loud and clear. On these figures the Conservatives will be out of power in May and the Liberal Democrats will be leading the charge. Labour put in a big effort too, and their vote dropped even lower than it was in 2016."

County Councillor Nigel Quinton, who won the Handside & Peartree seat with 48% of the vote in May also commented: "It will be marvellous working with Siobhán who has shown herself to be a brilliant candidate and I am sure will be a great councillor for Handside. It was though rather sad to see the Conservative Councillors, and their MP, complaining about the cost of the by-election - actually about 8p per Borough resident; wasn't it the Conservative party that spent £113 million of tax-payers money on an unnecessary and cynical General Election in June?"