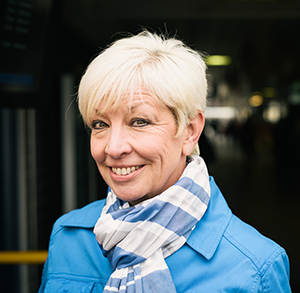 Liberal Democrat County Councillor Barbara Gibson has been selected to fight the next General Election for the Lib Dems. She was confirmed as the Party's Prospective Parliamentary Candidate for Welwyn Hatfield by local party members at a specially convened meeting on 28th February.

Barbara was elected as County Councillor for Haldens Division in Welwyn Garden City last May. A former university lecturer and business woman, Barbara is a relative newcomer to politics, joining the Liberal Democrats less than two years ago.

"To me, this feels like a natural extension of what I'm already doing here in Welwyn Hatfield," said Barbara. "All the issues that affect us locally are inextricably linked to national politics, from the huge cuts to local government funding, to the impact that a hard Brexit will have on our businesses, our jobs and our lives. I'm very grateful to have this opportunity to fight on behalf of Welwyn Hatfield residents to ensure our interests are represented properly."

Nigel Quinton, Lib Dem Parliamentary Candidate in the 2017 General Election, has offered his full support to Barbara: "Barbara has a special talent and will make a fantastic MP for Welwyn Hatfield - someone who truly listens to local people and will work hard to make their voices heard."

A native of Oklahoma, USA, Barbara has lived in the UK since 2002, and in Welwyn since 2005. She became a UK citizen in 2011. She holds a PhD in Intercultural Communication from Birkbeck, University of London.