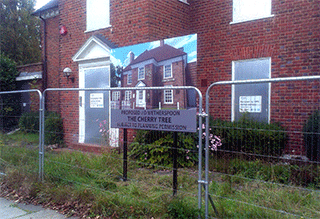 The unauthorised and possibly illegal new sign advertising yet another planning application for a pub at 22 Parkway WGC is already drawing criticism.

Wetherspoons did themselves no favours with their 2 previous planning applications - they failed to engage in any way with the public and its representatives, failed to talk to the planners and put in applications so poor they were unanimously rejected both times.

"Have they learned? - it seems not" says Libdem councillor Malcolm Cowan. "Not only does the building look an eyesore under Wetherspoons management, they have plonked up a sign that itself appears to need planning permission and hasn't got it. And they didn't even bother to cut the very long grass surrounding the sign"

If I was Tim Martin - owner of Wetherspoons - I would be putting people out of the door for their incompetence. But the Tories running the council need to have along hard look at themselves - surely the state of the building demands action, not just a few words? Surely no private homeowner would be allowed to let their building become such as eyesore, situated in the heart of the Conservation Area?