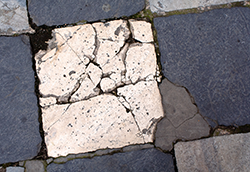 "Figures presented to the council's Highways and Transport panel showed that in the most recent complete year, 2011-12, 76,500 sq metres of footway were resurfaced or repaired, out of a total of 10.4 million sq metres. That means just 0.7% were worked on, so each stretch will be repaired approximately once every 136 years.

"This lays bare just how badly pedestrians and their safety are being treated. It completely justifies our demand in the budget that council tax already collected be spent on this instead of being allocated to supporting building projects that in any case run late."